Toodie was previously introduced with her mom, Pebbles. This is an update.

This little came into sanctuary very timid and uncomfortable with human touch. She now enjoys being held and loved but is still very timid. Unfortunately, Toodie experienced rapid onset blindness just as we moved into the new sanctuary. She has not adjusted well and seems lost when on her own. We make every attempt to make her feel safe by placing her with Pebbles or Honey or keeping her physically close. Toodie has severe tracheal collapse and requires medication to help her coughing.

Update May 2018: Toodie has recently experienced severe medical problems. She had very labored difficult breathing. On top of that she developed a very bad ulcer on her eye that was resistant to treatment. As soon as the breathing was better the vet removed her eye. Less than a week later the other eye ulcerated. She now has no eyes but since she was blind already, her life has not changed. We also now know that besides bronchialmalesia she also has COPD.

These are pictures of Toodie upon intake & then after her first grooming. 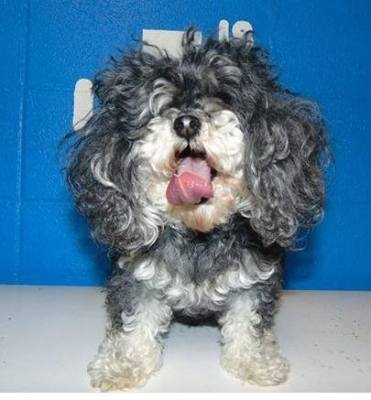